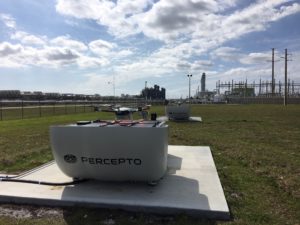 Florida Power and Light and Percepto

At the keynote address this morning in Orlando, Florida Power and Light and Percepto, the Israeli-based autonomous drone platform, took the stage to talk about the work that they are doing in Florida.

Florida Power and Light and Percepto are a partnership that is breaking new ground in the use of autonomous drone technology in the power industry.  FPL uses Percepto’s drones for disaster recovery, line maintenance, and more.  This morning, Eric Schwartz from FPL, manager of the FPL Flight division, joined Percepto Chief Commercial Officer Ariel Avitan to talk about how they do it and what comes next.

Percepto is now the most deployed drone-in-a-box, fully automated solution in the world: and Avitan says that Percepto’s products represent the practical side of concepts in automation.

Florida is making big strides in bringing automation technology to the state, and both the FAA and the state have supported FPL with the appropriate permissions and waivers.   Community acceptance is key; and FPL  has made a huge effort to communicate with their customers about their drone use, and the ways in which it contributes to FPL being one of the lowest cost and highest reliability energy providers in the country.  The company currently has 6 Percepto drones: they flew over 125,000 flights last year, 75% of which were in Florida.  “Safety and privacy are priorities for everything we do,” says Schwartz.  “Safety is in front of everything else.”  For every single one of those 125,000 flights, FPL contacted the affected customers, to let them know that a drone would be flying nearby – and providing examples of the images data gathered to help people understand what the drones are doing.

“From the technology side, we’re taking privacy very seriously,” Avitan says.  Percepto uses AI and machine learning to inform what images the Percepto drones gather, and which they avoid.  In addition, they’re extremely focused on protecting their platform from bad actors.  “On the cyber end, there is a long list of things that we do.  It’s a big topic for us.  It’s part of the world, and we understand that.  It’s what our clients need.”

“Our goal is to put an automated drone at every station in Florida – that’s over 600 stations,” says Schwartz.  They’ll take a “crawl, walk, run” approach – starting with what he describes as a mesh network of 13 Percepto drones in one region this year.

“This is a huge opportunity for us,” says Avitan.  “This has changed the way we look at operations.”  Percepto will be opening their global support center in Florida, creating new jobs in the state and bringing their operations to their biggest customer.  “This project is also amazing for the industry,” he says. “… it shows what kind of savings and value these autonomous programs can offer.”

What the Future Holds

“What we’ve seen with Florida Power and Light and Percepto is that they’ve taken a very specific approach over a long period of time,” says Avitan.  “We started with one drone to make sure it was safe.”

“As a supplier of technology, we use highly advanced robotics – and they can do anything…. but at the end, it’s the use case that you need to solve,” he says.  “Today, there are so many use cases that are still being done manually.  We can move into these areas and use the same automated processes.”

Schwartz agrees that there is far more scope for autonomous drone systems.  “We’re continuing to find new use cases, and new ways to increase our ROI.”