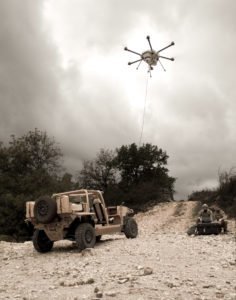 French drone manufacturer Elistair, a leading provider of tethered surveillance drone solutions, has announced their newest offering: the Orion 2 tethered unmanned system for military, government, and industry users. “Unlike other multi-rotor drones, the Orion 2 hexacopter delivers round-the-clock surveillance for up to 24 hours at a time, making it a true persistent surveillance platform,” says a company press release.

“Small, unmanned multi-rotor systems are great if you want a hover-and-stare capability, but they’re also notoriously short on battery life,” said Timothée Penet, CTO and co-founder of Elistair. “Powered tethering stations, like our Safe 2 and Ligh-T 4, offer a solution by increasing a platform’s time in the air—and that’s great for many missions. But what if you need to be on station for a whole day?”

The Orion 2 is a rugged, lightweight system that can stand up to a wide variety of environments.  Elistair describes Orion 2 as a “quick-deploy system”  – utilizing an automated push-button takeoff and landing.  Most importantly, Orion 2 can stay in the air for 24 hours.  “…something that, previously, could only be done by a helium-filled tactical aerostat, which was a much larger platform and came with a very complicated logistical train,” says Elistair.

“We developed redundancies at every level to ensure that the Orion 2 could stay up that long,” said Pierre- Moana Levesque, R&D Director at Elistair. “For example, we made it IP54; we optimized the lifespan of the components, including the motors; and we added a safety battery that could recharge in the air.”