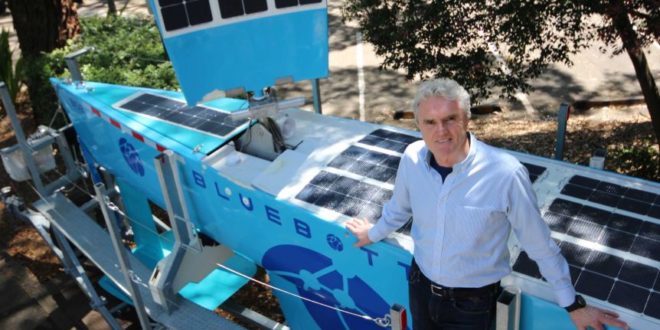 A fleet of unmanned, remotely piloted boats will be launched next year to help detect illegal vessels entering Australian waters.

The ocean drones will patrol waters off the Top End in the Indian Ocean, with the technology to detect unauthorised vessels, alert authorities and then be piloted out to the vessel for further investigation.

Robert Dane, the chief executive of OCIUS, which developed the technology, said the idea was to create an ocean drone that could do the mundane or dangerous jobs currently carried out by by defence force personnel.

“Those jobs put people, our men and women in uniform in harm’s way,” Mr Dane said.

“A robot that is persistent and unmanned and does not need fuel or get bored, is ideally suited to do that dull and dangerous work.”

Bob runs entirely on solar, wind and wave power, meaning it never needs to return to shore to refuel.

The durable design has also attracted interest from the Department of Defence, leading to OCIUS being awarded a $5.5 million contract with the Defence Innovation Hub to design a fleet of six drones.

After Bob the Bluebottle’s successful voyage, OCIUS mechatronics engineer Mathew Kete said he was confident the rest of the fleet would be up and sailing by next year.

“He’s sailed really well, which we have seen before, but to make the journey he’s barely spent any energy on the motor,” Mr Kete said.

“He’s just been able to sail all the way along, which was pretty awesome.”

The drones will also have the capability to send data on major weather events.

The vessels will be able to sail into cyclones to determine their ferocity, or feel the shift in the ocean if there is an earthquake, which will forecasters to gauge the risk of a tsunami.

Ruth Patterson, a PhD candidate at Charles Darwin University, has been using weather data sent back by the drone for her research, as well as piloting the boat on test runs.

“If there’s a cyclone, we can send the drone in to measure the air pressure, which is something we couldn’t send people in to do,” she said.

“It will show us more about the system and what it will look like when it makes landfall.”

The drones are currently being built and are expected to hit the water early next year.