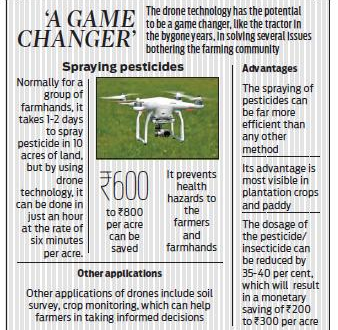 VIJAYAWADA: Acharya NG Ranga Agriculture University (ANGRAU) is planning to use drones in the agriculture sector by next Kharif in Andhra Pradesh.  Seen as an important step towards modernisation of the agriculture sector to make it more cost-effective and a solution for manpower shortage, drone technology, which is being tested in the labs of the varsity, will be tested in fields soon with help of the Andhra Pradesh Drones Corporation, before releasing it for commercial use, once the university gets permission from the Government of India, said ANGRAU Vice-Chancellor Dr Adala Vishnuvardhan Reddy.

Speaking to TNIE, he said the new technology has the potential to be a game changer, like the tractor in the past, in solving several issues bothering the farming community, particularly the shortage of farmhands. Elaborating further, ANGRAU Vice-Chancellor said normally for a group of farmhands, it will take one to two days to spray pesticide in 10 acres of land, but by using drone technology, it can be done in just an hour at the rate of six minutes per acre.

“The advantage of using drones is the spraying of pesticides can be far more efficient than any other method. Particularly, its advantage is most visible in plantation crops and paddy, where the insecticides need to be applied at the root-level,” he said. Unlike manual application of pesticide, efficiency will be uniform while using drones for the purpose.

To address the Brown planthopper infestation in paddy, agriculture scientists recommend application of insecticide at rootzone, which is very difficult, when the crop has grown to a certain height. However using drones, it is possible to effectively apply the insecticide at the root level. “When the drone is hovering above the crop, just like a helicopter producing wind while landing, there will be wind, which results in spreading effect in the crops, making it convenient for application of the insecticide at the root-level,” Vishnuvardhan Reddy explained.

Most importantly, the dosage of the pesticide or insecticide can be reduced by 35 to 40 per cent, which will  result in a monetary saving of `200 to `300 per acre. Application of insecticide costs around `1,000 per acre. “When the amount saved in employing manual labour and in pesticide is taken into account, approximately `600 to `800 per acre can be saved,” he said, adding that the advantage is it saves time. Another benefit of employing drones in pesticide spraying is it prevents health hazards to the farmers and farmhands.

Other applications of drones include soil survey, crop monitoring, which can help in taking informed decisions and find needed solutions in time.  They can also be used for evaluating soil moisture. Advanced drones can also be used for irrigating the crops and seeding.“It is an important part of farm mechanisation and ANGRAU is now engaged in standardising the use of chemicals/pesticides using drones, as the volume or quantity to be applied to the crops differ from the manual application,” the V-C said.

Recently around five different drones were procured by the university under the APSARA (Centre for AP Sensors and Smart Applications Research in Agriculture) and they are being tested. Negotiations are on with both Central and State governments for field testing and once successful, it can be used on a large scale for regular farming.