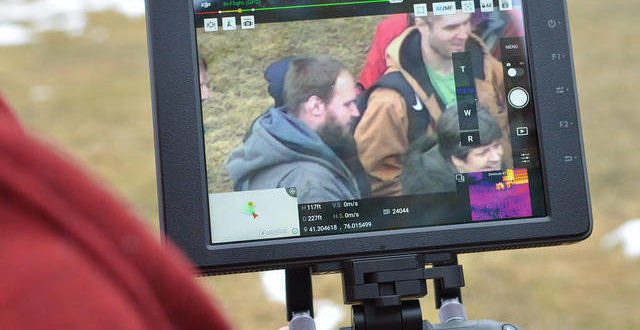 Drones are serious business as witnessed at PSU/WB demonstra…

No, it’s just a drone. And the word “just” doesn’t apply.

Jared Reimer, from ABJ Drones, a New Jersey-based company that deals in the flying eyes in the sky, offered a presentation at the Penn State Wilkes-Barre campus Friday morning. It wasn’t only a PowerPoint show, but was complete with a demonstration of some of the ways drones are now being used to help nearly a dozen areas of business and society at large.

Bringing the presentation to the campus was the brainchild of Jonathan Pineno, a lecturer in music and art at the campus. He said he tries to bring reality into the classes he teaches.

“I am teaching a class in forensic photography, a new course this year,” Pineno said. “And drones are a part of it. They play a huge part in crime scene investigations.”

In some cases, a high-end zoom lens on a drone can home in a face, a license plate, even a logo on a polo shirt, to help identify a suspect in a crime. Drones can also be used to find missing persons, either living or dead, who might be lost in a field, woods or open area.

That’s just one of the areas in which people are using drones. Technicians can send cameras skyward to inspect power lines and the towers that hold them, do routine maintenance checks on cell phone towers and keep an eye on the mechanical health of the structures that provide renewable energy, like windmills. All this saves companies the cost of hiring crews and equipment to do hands-on inspections.

Companies hire drones to perform volumetrics, a process in which drone cameras take dozens of photos of piles of supplies like highway salt or construction materials. From the data gathered, technicians can do the math and calculate, to the 99th percent, how much material is available.

“These things are incredibly precise, much more so than trying to estimate how much material you have on hand,” Reimer said.

Thermal cameras on a drone can get shots of heat being generated by solar panels to indicate specific issues that need to be fixed or issues with an HVAC system in a factory. They can be used for building inspections, showing problems with construction. Insurance firms can use drones after hurricanes or tornadoes to assess damage in areas still unsafe for people to enter.

And drone cameras’ ability to capture infrared and ultraviolet light rays can also help farmers pinpoint problem areas in their growing fields and areas of plants that might need more water, less water or fertilizer.

“Drone cameras produce a ridiculous amount of data,” Reimer said. “And all of it means nothing until it’s all analyzed and quantified. And then it becomes extremely helpful.”

While the demonstration was originally a class exercise, it grew into a community event. Representatives from township governments, police, firemen as well as teachers and administrators from the Tunkhannock Area School District were on hand. They all came to get an idea of what drones can do and, later, get a close-up view of a drone in action. And, they were invited to ask questions.

“We came to see what the potential is here. We’re trying to develop a course in drones at the high school,” said Doug Wilson, a teacher at Tunkhannock Area High School. He was with the district’s tech director and the head of the career and technology center at the school.

“Our superintendent has a goal of having our students graduate with a diploma in one hand and a certification in some field in the other, so that they can get a head start on a career,” he said. “And this technology is becoming a huge part of the future in a lot of areas.”

While individuals who want to dabble in drones can buy one for as little as $20, the people who want them for professional use will have to dig deep into their pockets. Those seeking the highest of high-end drones with multiple cameras and extreme zoom lens capabilities might have to hold a few bake sales to come up with upwards of $30,000.

And everyone will have to pay close attention to a lot of potential legal issues that might arise. There are concerns about privacy issues, property rights, search warrants, liability insurance and a dozen other parts of the law that can be affected by using drones.

“These devices can do a lot of good,” Reimer said. “And the potential exists for some people to do illegal, bad, wrong things with them, as well. It’s like the Internet. Right now, a lot of these issues fall into gray areas. Lawmakers – and the FAA (Federal Aviation Administration) – will come up with regulations that, hopefully, solve a lot of those issues.”

In the meantime, there’s a lot of potential good that can come out of drone use. And Pineno hopes to help his students learn how.

“It’s some of the newest technology to help sort out a lot of issues,” he said. “I want my students to learn all they can about what’s available to them so they can become the best at whatever they choose to do.” 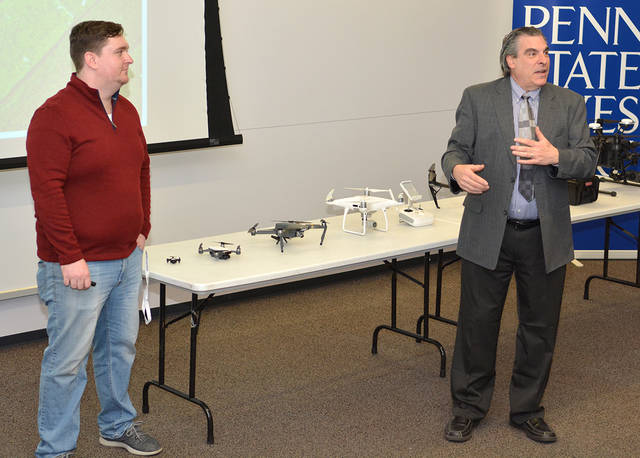 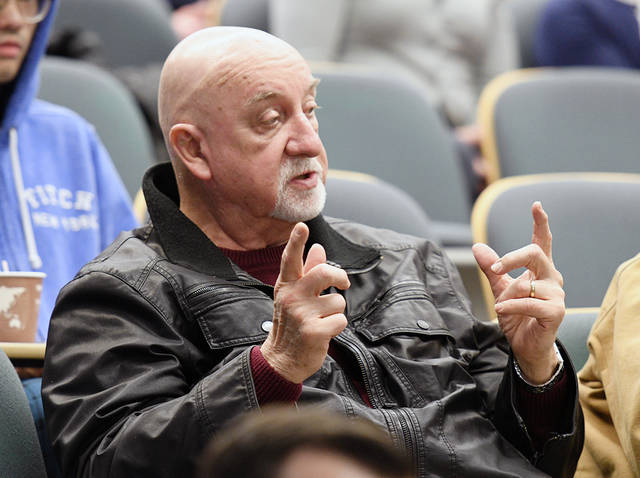 Ray Iwanowski, Lehman Twp. supervisor, inquires about drone use during the demonstration. 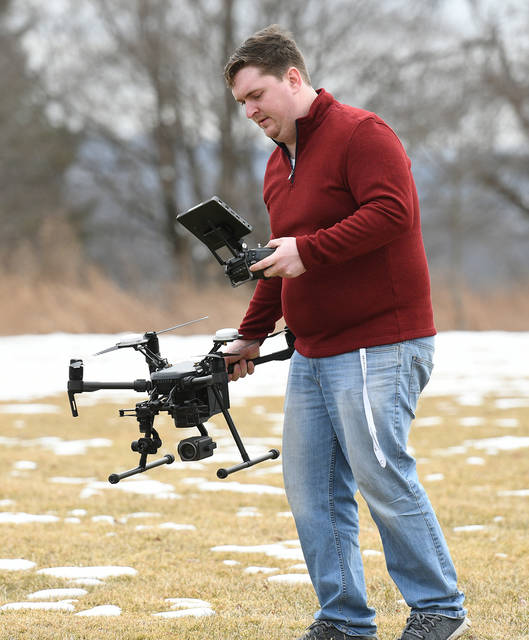 ABJ Drones’ Jarret Rhyner calibrates the $35,000 drone before takeoff on the PSU/WB campus. 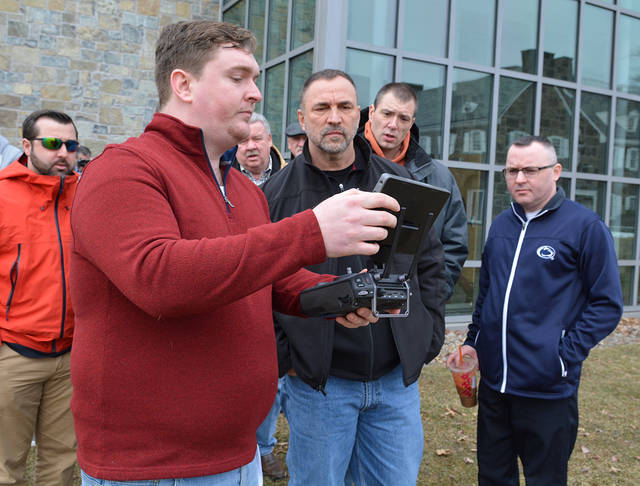 Local government officials were among those who came to the demonstration of a drone conducted by ABJ Drones’ Jarret Rhyner.

This high definition screen capture was shot at 117’ in the air.