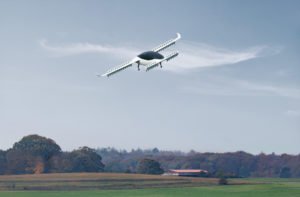 The internal funding round is led by Tencent, with Atomico, Freigeist and LGT participating. The funding will fuel Lilium’s development and production of the Lilium Jet, an all-electric, VTOL passenger drone .

“This additional funding underscores the deep confidence our investors have in both our physical product and our business case,” Lilium CFO Christopher Delbrück said. “We’re very pleased to be able to complete an internal round with them, having benefited greatly from their support and guidance over the past few years.”

A Lilium spokesperson told DroneLife the 36-engine jet consumes around 90 percent less energy than other drone-style aircraft. That translates to a range of about 186 miles with a top speed of 186 mph.

The jet features two fixed wings – a main rear wing measuring about 36 feet across and a “canard” front wing at the front (said to resemble a duck). The canard wings each sport two flaps while the main wings have four.

Three electric jet engines are mounted on each flap and can pivot and change thrust direction as the flaps move independently. The Lilium Jet lacks many of the moving parts found on other jets –  no tail, rudder, oil circuits,  gearboxes or variable-pitch fan blades with only one moving part in the engines.

A company blog post explains how the jet flies:

“We use a concept called thrust vectoring, which is more commonly associated with space rockets and fighter jets. In space you can’t rely on flaps and ailerons to direct the aircraft as you’re in a vacuum. Instead, you change direction by adapting the angle of the thrust you generate. The Lilium Jet works on a similar premise. As the engines move together with their nacelles, they perform the function of aerodynamic control surfaces, allowing us to direct and move the thrust.”