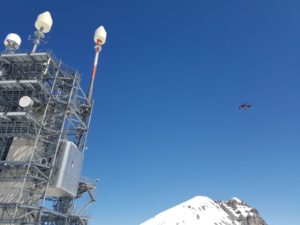 A Swiss-based drone firm is making cell towers safer and cheaper to examine due to an automatic seize app.

Drone Harmony of Luzern, Switzerland has developed Cell Tower Scan, an Android app that makes use of the corporate’s UAV planning framework to finish cell-tower inspections in 5-10 minutes utilizing quadcopters.

“In a nutshell, we have made it as easy as possible for the pilot to obtain the quality data that is needed for this task. The flight plans in Drone Harmony are generated automatically and are tailored to a rough 3D model of the inspected tower. The model can be either imported, or easily constructed in the application using a simple wizard. Obstacles can also be included in the model and the generated plans avoid these obstacles automatically. Every step of the simple setup procedure is visualized in 3D, so there is very little uncertainty, or room for error. Finally, the app flies the drone automatically.”

“With a drone, it is possible to capture the tower at ultra-high resolution from all angles,” Adjiashvili added. “This data can be fed into photogrammetry software to create a digital model of the tower which can be the basis of much more complete and in-depth inspection. These models can also be fed into an analytics program for automatic detection corrosion and report generation.”

Drone Harmony works with a number of trade companions on drone workflow automation for numerous industrial use instances, together with Bentley System’s Reality Modelling staff, SiteSee (AUS), The iGlobe Group (RSA), VertSpec (USA) and SimpleInspect (Denmark), in addition to dozens of consumers and resellers around the globe.

“I’m excited how this technology can simultaneously solve several pain points for an industry that is ready for its adoption at scale,” Adjiashvili stated. “With 5G becoming the next standard in the industry leading to a vast increase in the cell sites, these pain points are only projected to increase, so the timing is perfect.”

Beginning his profession as a journalist in 1996, Jason has since written and edited hundreds of participating information articles, weblog posts, press releases and on-line content material. He has received a number of media awards through the years and has since expanded his experience into the organizational and academic communications sphere.

In addition to his proficiency within the area of enhancing and writing, Jason has additionally taught communications on the college stage and continues to steer seminars and coaching classes within the areas of media relations, enhancing/writing and social media engagement.