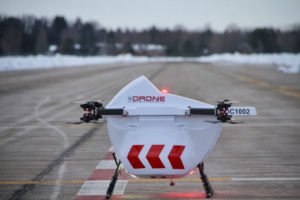 Lifesaving flights are in the air for Drone Delivery Canada after the Toronto-based community announced COVID-relief projects with two Canadian First Nation groups are operational.

In June, Drone Delivery Canada announced a collaboration with GlobalMedic and Air Canada to deliver COVID-treatment cargo to Christian Island, a remote territory governed by the Beausoleil First Nation Community in Ontario.

The next month, the company launched a partnership with the Georgina Island First Nation to provide delivery services to the Ontario community. A two-way delivery flight route to the First Nation’s mainland community deploys a Sparrow drone and DroneSpot takeoff-and-landing zones.

The project – with an assist from Air Canada and the Pontiac Group – is intended to limit person-to-person contact on the island communities’ ferry services by transporting COVID-19 related cargo such as personal protection equipment (PPE), hygiene kits, test kits and test swabs by drone.

“We are pleased to see both projects operational and look forward to seeing the meaningful benefits our solution can bring to these Indigenous communities. Difficult to access locations, time critical deliveries and limiting person-to-person contact are all ideal use cases for drone logistics.”

Earlier this month, DDC finalized a research agreement with the University of Toronto Institute of Aerospace Studies in cooperation with automaker Ford. The group will test an automated drone as it tracks and lands on a moving ground vehicle within the flight arena. Also in October, DDC signed an agreement brokered by Air Canada to work with Kenyan startup Astral Aerial Solutions Limited to grow the African nation’s drone delivery market.