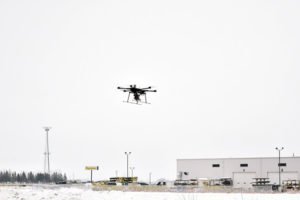 A consortium of university and corporate UAS players just made the skies safer for drones over North Dakota and their achievement is likely to soar into the global community.

The University of North Dakota, in cooperation with aerospace company Harris Corporation and the  Northern Plains UAS Test Site, last month conducted inaugural test flights over a “specially developed UAS network of technologies that opens the skies for broad commercial use of drones,” according to a UND press release.

The detect-and-avoid capabilities system will enable commercial drones to fly farther and safer beyond the visual line of sight (BVLOS) within national airspace.

In 2017, Harris and UND created an initial partnership with the mandate to create a network infrastructure system designed to provide a full range of aviation-grade services for safe and efficient UAS BVLOS operations.

Under the direction of UND’s Research Institute for Autonomous Systems, the network will monitor a 55-mile-long corridor between Grand Forks and Fargo – a task that UND says represents “the drone industry’s first-ever implementation of wide-area, multi-user UAS BVLOS airspace.”

“A lot of the technology was developed at the University of North Dakota, so this is a huge day and a very big deal for us as well as for our partners at Harris and the Northern Plains UAS Test Site,” Mark Askelson, interim executive director of UND’s Research Institute, said.

The successful test flight was one victory among many for the Harris UAS Network. North Dakota Gov. Doug Burgum recently recommended a $30 million investment to develop statewide infrastructure supporting drone and BLVOS operations.

“These tests signify the start of operations on the network, which is the first one anywhere that’s been deployed for multi-user commercial applications,” Director of research and development Chris Theisen said.

“The deployment of the Harris UAS Network system … demonstrates the leadership of North Dakota in attracting UAS research, entrepreneurship and investments. As the network infrastructure extends across the state it will facilitate broad adoption of UAS, allowing governments to better serve their communities and making the leading industries of North Dakota more productive and competitive in the global marketplace.”