Castle Pines uses drones instead of fireworks for 4th of Jul…

Fireworks can be dangerous in the summer months, when fire danger is especially high.

CASTLE PINES, Colo. — The Fourth of July and fireworks usually go together.

But as Colorado’s summers see more and more days with high fire danger, cities across the state are turning to an alternative to the loud booms in the sky. Castle Pines in Douglas County is the latest to use drones instead of fireworks for its Independence Day celebrations.

“It seems like everywhere we’ve performed so far it was the first drone show for people,” said Graham Hill, Founder and CEO of HireUAVPro.com. “It sounds like a swarm of bees pretty much.”

Hill is in charge of the swarm of 100 drones flying through Castle Pines Sunday night. His company puts on shows around the country.

A field of dry grass would be a recipe for disaster if this year’s Independence Day entertainment were fireworks.

Drones provide peace of mind when it comes to fire. Hill and his team are putting on three shows around Douglas County this weekend. They’ll do more than 50 around the country this year.

“In Colorado, the writing is kind of on the wall,” said Hill. “It’s a tough time of year to have things burning and falling from the sky on fire. The fire risk is just too high to do it consistently.”

The drones are programmed to fly together as the sound of small propellers replaces the traditional booms.

Douglas County will host one more drone show on Monday night in Parker.

RELATED: 81 firework shows across Colorado this 4th of July 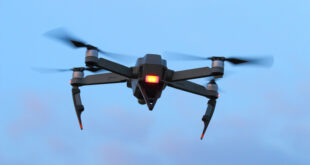