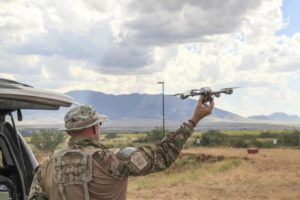 The three women, who agents say had entered the country illegally, called 911 to report they were lost somewhere in the desert north of the Highway 86 Checkpoint near Calexico, Calif.

The agency deployed a search drone team and, within 45 minutes, found the women, treating them for dehydration.

“There was no water or shade available in the remote area of the desert where the three women were located,” a CBP press release stated.  “The three individuals stated that they were dropped off south of the checkpoint with no food or water and with no intention of being picked up again.”

“The three women, two unaccompanied juveniles and one adult, all Mexican nationals, were immediately expelled back to their country of origin,”

Since 2006, the agency has also used Predator B drones, a version of the U.S. military’s MQ-9 Reaper drone, along the border.

In terms of the search drone program’s legality, a Vox report notes:

“With regard to where these devices are allowed to fly, CBP says it largely uses these drones within the ‘immediate border area’ within 25 miles of the border. Legally, the agency is restricted by the Federal Aviation Administration to fly drones between 25 and 60 miles of the US-Mexico border, excluding urban areas.”

“Between October 2018 and April 2019, US Border Patrol flew these sUAS devices for a total of around 176 flight hours, resulting in 474 apprehensions of individuals at the border.”

“CBP’s drone program has failed to live up to its expectations. Its expense, disproportionately small contribution to border security, and infringement on Americans’ privacy are good reasons for CBP to wind down its drone program. However, if CBP does continue to use drones, it should further constrain their use to prevent unnecessary data collection of Americans.”