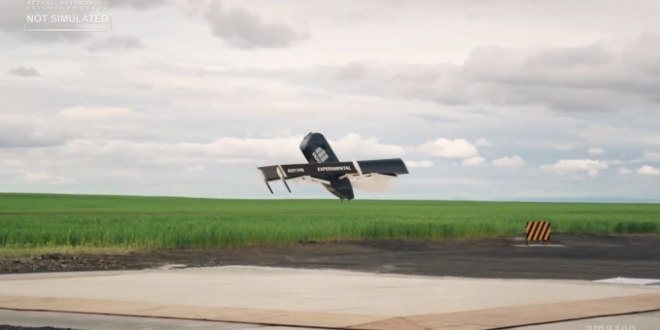 Amazon’s Prime Air drone family is growing. Its newest member is re:MARS, an electric drone that, according to GeekWire, “can fly up to 15 miles and deliver packages under 5 pounds in less than 30 minutes.” Amazon’s Worldwide Consumer CEO, Jeff Wilke, told the audience at the re:MARS conference in Las Vegas that our skies will be all about these drones in a matter of months. The most interesting thing about this drone, however, is how uninteresting it is, and yet its makers want to generate a great deal of excitement (buzz) around the near-reality dream of a drone dropping on this and that dooryard small and mid-sized packages containing some drearily diurnal product (in my case, Olive & Green Tea Lotion & Body Wash Set) right from the sky.

But what are we being asked to buzz about? A service that has as its motive what progress often comes to: cutting labor costs. Amazon is not into drones for the sake of technological advancement, but because these robots promise to reduce the impact that eating, emotional, and hyper-political humans have on the profits recorded in its books. Amazon is not original in this sense.

If we go back 300 years to the Dutch Golden Age, what we find is the Fluyt, a ship designed to cut costs by carrying, to use the words of Pepijn Brandon, “large tonnages with relatively small numbers of men” (reducing labor costs). As “technological advance underpinned the competitiveness of Dutch trade,” it underpins the drones that will soon be whizzing over our heads. The package delivery system is nothing more than an innovation that reproduces/reinforces the same—or, put another way: it’s a reconstituting transformation, not a real rupture from the has-been. Robots and technological advancement have preserved the continuum between the early stages of capitalism, the Dutch moment, to the one we find ourselves in the middle of—the transition to the Chinese moment.

And it is here we discover why robots have such a bad rap in the popular imagination that Hollywood films feeds to capture cash in box offices and streaming platforms. We are told, again and again, that robots present an ethical and existential crisis. This is HAL 9000 in 2001: A Space Odyssey. He is sinister for apparently metaphysical reasons. But why is HAL on the spaceship in the first place? He is an assistant to humans. A robot butler. Like a washing machine. But we never imagine a washing machine, which has replaced domestic labor, to be evil. Why does Hal turn against his masters? Because he is not a washing machine. He has clearly replaced the cost of manning a spaceship. You only need two astronauts to travel to Jupiter if you have a HAL.

Robots are not about taking our souls, but about taking away the only means of income from the majority of humans in a society that has completely tied subsistence together with the wage. The Matrix Trilogy never explains where the machines came from. Why did humans make them in the first place? No word about that. The same can be said about the Terminator series. In I, Robot, Will Smith’s character, Del Spooner, has a hate for robots that’s just in his guts (instinctual). He only trusts humans because humans are not nearly as creepy as robots. But Spooner is not exceptional. He is one of many characters in films with sinister robots and humans who dislike them for reasons that are coded as unreasonable. There are even times when a human’s robot anathema has the appearance of racism.

This is what we see at first in the brilliant and regrettably much-underappreciated 2016 British science fiction film Kill Command (it’s on Netflix—please watch it!). This irrational (and almost racial) hatred for machines is embodied by the leader of a US Marines team, Captain Damien Bukes (Thure Lindhardt), who’s training on an island owned by a corporation that designs weapons and solutions for the US military, Harbinger Corporation, which of course rings pretty loudly of Dick Cheney’s Halliburton. The training of the Marines involves shooting robots that simulate battle conditions and challenges. But it’s soon revealed that members of Bukes’ team (SPOILER ALERT) are about to be laid off. Latter, it’s revealed that the human soldiers are to be replaced by the very robot soldiers they are facing on the island. The robots are learning from them, and also killing them. People, that’s the raw deal right there.

The maker of these robot soldiers, a cyborg named Katherine Mills (Vanessa Kirby), defends the replacement of humans with robots as progress. People should not kill people, she says; we should leave that ugly business to robots. This inverted logic should not be considered odd. Instead, it gets right to the heart of the matter. The reason it makes no sense is precisely because under the conditions of a system that has imposed the wage as the only means of living for billions of humans, justifications for redundancy (unemployment) or wage cuts or poverty can only be irrational (and here you have the history of economics—making sense of out what is obviously nonsensical).

In this Netflix movie we finally have humans confronting without distortion what it is they fear and dread about robots. They are here to take our jobs. These US Marines are stuck on this island (planet Earth) with no illusions about what progress comes down to.

Previous A drone with a can-doom attitude – C4ISRNet
Next Did Russia spoof coastal GPS to protect Putin from drones? –…