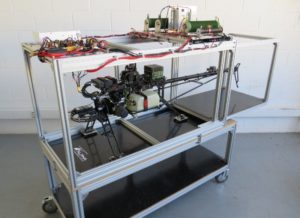 “This means that Alpha’s engines and transmissions will be tested in ‘near-flight’ environments for significantly longer periods of time and in environments more similar to actual flight,” a company press release reveals.

HALT will also be used to define the maintenance periods of Alpha’s new drone platform, to execute the defined engine endurance tests and to fine-tune the fuel-injection system.

“Testing is critical for flight reliability and safety. The incorporation of HALT will dramatically increase the testing hours that Alpha engineers can use to improve design and manufacturing,” Alpha co-founder/CTO Álvaro Escarpenter said.

Engine and transmission systems are especially critical for helicopter and rotor drone platforms. Since testing and validation exercises are time-consuming and costly, and since industrial systems must be tested for thousands of cycles during development, Alpha expects to dramatically improve airworthiness of its UAV platforms using HALT.

Last year, Alpha participated in Inmarsat´s UAV Pop-up lab. The satellite and communications giant is using the program to explore the value of satcoms in the commercial UAV sector.

Along with six other UAV companies, Alpha will execute a range of missions using Inmarsat´s global satellite network.

The Spanish company will integrate Inmarsat’s connectivity services using the Cobham AVIATOR UAV 200 terminal with its Alpha 800. The Alpha 800 is a gasoline-powered UAV that provides 3 hours of continuous flight with a 3 kg payload. The drone is equipped with what Alpha describes as “the lightest and strongest airframe in its class and a military-grade autopilot with high precision GPS and sensors.”