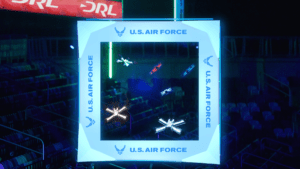 Continue reading, or listen below:

Now, the US Air Force and Drone Racing League have partnered to “showcase their mutual commitment to ‘Innovate, Accelerate, and Thrive’”: creating new content, immersive gaming and pilot spotlights from Military Appreciation Month through the 2022-23 DRL Algorand World Championship Season.

Recruiting the Next Generation of U.S. Air Force Pilots

Partnering with the Drone Racing League makes the U.S. Air Force look cooler – and that’s the point.  Both the U.S. Air Force and the Drone Racing League have both been at the forefront of innovation in the drone industry, both introducing new technologies that find their way into commercial markets and support new applications.  With this partnership, the USAF hopes to reach their next generation of pilots – especially those already skilled drone pilots, says a DRL press release:

With 60% of DRL’s fans viewing brands and organizations that partner with DRL as “more innovative” and “on-trend,” the U.S. Air Force will continue to educate and recruit the league’s Gen Z tech-obsessed, Tech-setter fans as Airmen. Recently named one of FastCompany’s Most Innovative Sports Companies in the world, DRL transcends sports through disruptive technology, a boundary-pushing ethos, and a new era of athletes that compete across IRL, esports and the metaverse.

“For the past 75 years, the spirit of innovation has driven the U.S. Air Force and enabled our Airmen to Fly, Fight and Win. As we celebrate our historic milestone, we are proud to expand our partnership with the Drone Racing League, a sport that shares our passion around technology, speed and precision, and inspires their young fans to aim high,” said Lt. Col. Jason Wyche, chief of the national events branch at Air Force Recruiting Service.