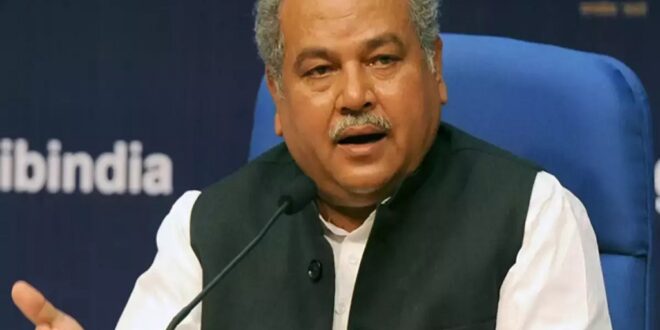 
Agriculture Minister Narendra Singh Tomar said on Thursday that increased investment and the use of innovative technologies in the farm sector are required to ensure stronger growth.

The minister said that as part of the government’s aim to double farmers’ income, the government has implemented various reforms and introduced many programs, including PM-KISAN, during the ‘8th India Maize Summit 2022’ conducted by industry group FICCI.

“Agriculture is in desperate need of investment. The necessity to connect agriculture and technology is urgent “Tomar explained.

The government has boosted the minimum support price (MSP) for maize considerably to enhance the production of this coarse cereal, the minister said, citing the crop’s numerous benefits as a foodgrain, animal feed, and ethanol producer.

Tomar pledged to the industry that he would take their proposals into consideration after the summit’s deliberations. He also emphasized the importance of the agriculture sector to the Indian economy.

According to Tomar, the industry functioned magnificently during the COVID pandemic.

According to the minister, India’s agricultural exports have surpassed Rs 4 lakh crore, which is a positive development. Tomar claims that India is exporting wheat in large quantities as global demand rises due to the conflict between Russia and Ukraine.

The minister stated that the administration is dedicated to the development of farmers, rural areas, and industries. Union Agriculture Minister unveils integrated and high-tech online portals for agricultural commodity export and import and pesticide registration in a huge boost to ease of doing business.

According to Tomar, drone applications of practically all listed pesticides have been approved. It is a source of pride that Agri-exports and the convenience of doing business have increased dramatically. The Indian government is determined to improve agriculture.

Show your support to Agri-Journalism


Dear patron, thank you for being our reader. Readers like you are an inspiration for us to move Agri Journalism forward. We need your support to keep delivering quality Agri Journalism and reach the farmers and people in every corner of rural India.


Every contribution is valuable for our future.